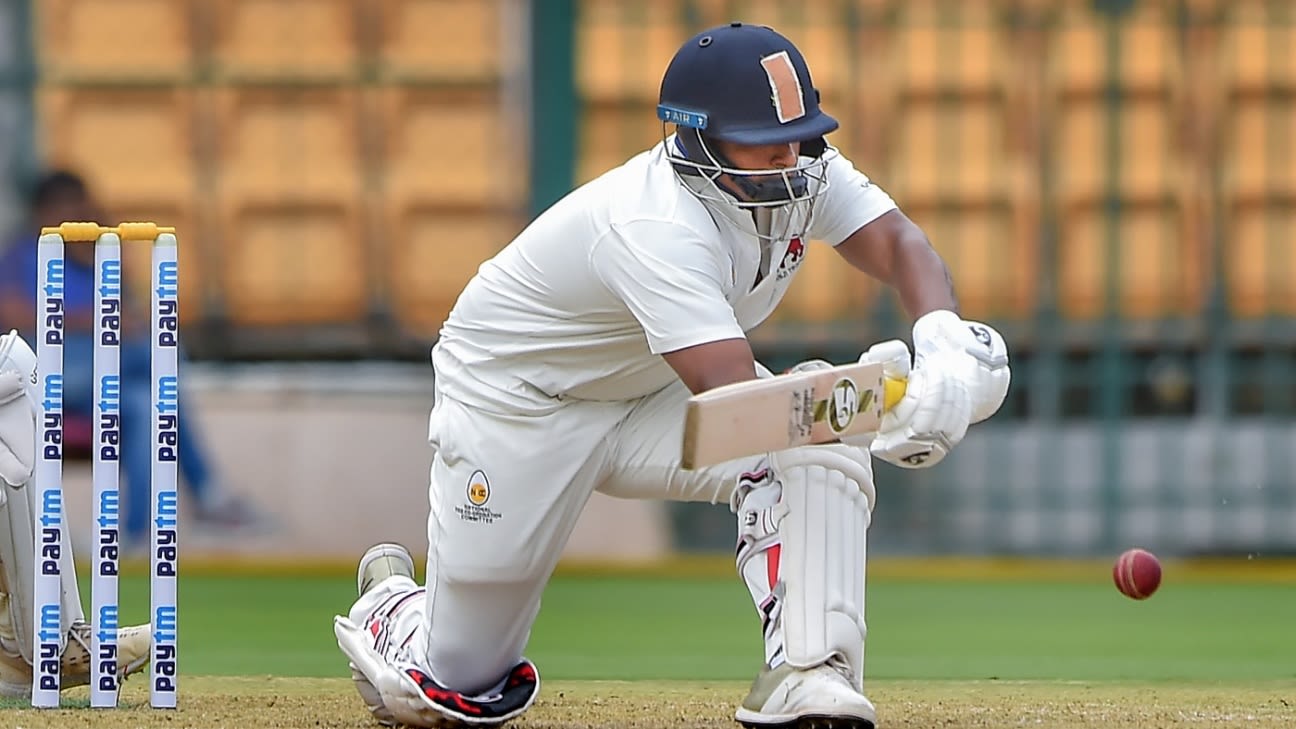 Madhya Pradesh slowly chipped away at the runs and have built a base camp from which they will look to scale Mumbai’s first innings score of 374 as the Ranji Trophy final is delicately poised going into the third day in Bengaluru.
Having taken a wicket off the second ball to have Mumbai 248 for 6, they saw Sarfaraz Khan rally with the lower order to make his fourth century of the season. However, MP hung in there and made a solid beginning to their own innings, finishing on 123 for 1 at stumps, trailing Mumbai by 251.
Yash Dubey, out to two somewhat debatable calls in the semi-finals, was unbeaten on 44. He was overshadowed by Shubham Sharma, who battled a lot more positively to keep the scoreboard moving along, thereby giving Prithvi Shaw and co something to think about as an all-out attacking field slowly spread out as the final session progressed. Towards the end, Dubey managed to even overtake Shubham as their partnership was worth 76.
All said, Mumbai still have the runs to play with but MP won’t be too disappointed either, given they are also playing an extra batter in debutant Parth Sahni. Their stonewaller Himanshu Mantri would be disappointed, though, missing out on a start as he fell for 31 in the first over after tea as he played all around a full Tushar Deshpande delivery to be trapped lbw. It broke a stubborn 47-run opening stand to lift Mumbai after the fast bowlers probed away without much luck prior to the tea interval.

After tea, Dubey and Shubham raised a half-century stand off 89 deliveries. Just as they were beginning to look increasingly at ease, a change of ball in the final session seemed to make a difference as Deshpande and Mohit Awasthi forced the batters to shut shop by delivering a probing spell of reverse swing bowling as stumps loomed.

Reverse swing aside, Awasthi, the first-change bowler, impressed in short bursts, occasionally getting the ball to rear up to make Dubey uncomfortable, but he couldn’t sustain it for long enough. As spin came on, both batters kept milking runs. Shams Mulani, easily Mumbai’s best bowler so far this season with 37 scalps at an average of 15.64, was particularly picked off with ease. He conceded 46 runs in 11 wicketless overs. More than the runs, that he couldn’t even cause a flutter would worry the team management.

The morning entirely belonged to Mumbai as Sarfaraz bailed the team out with the lower order. He found some staunch resistance from Dhawal Kulkarni as he got to a well-constructed eighth first-class century. It took him 152 balls to get to a half-century, and only 38 more for him to complete the hundred. He was particularly severe on the spinners as he used the full-blooded sweep to good effect.

The first eight overs produced just 10, but Sarfaraz was happy to play himself in and temper his game to give bowlers the first hour. He reined in his shots, resisted temptation to try and pick off cheeky boundaries like he usually does, focused fully on playing orthodox cricket.

After Mulani was out second ball, Tanush Kotian barely survived, pushing, and prodding against the fast bowlers before an unplayable delivery got him when Gaurav Yadav bowled him with a superb away-swinger to flatten his off stump. Yadav, who wheeled away without any luck on the opening day, had four wickets to show for his efforts by the end.

Kulkarni’s stonewall for a better part of an hour allowed Sarfaraz to play hit shots. He got to a century with a lofted hit down the ground off Kumar Kartikeya’s left-arm spin. His animated celebration thereafter had the sparse crowd, national selectors and his teammates give him a standing ovation. He added 34 runs more but eventually fell playing one big shot too many. By then, Mumbai were in an excellent position, leaving MP to do all the running to try and remain in the game, which they have.