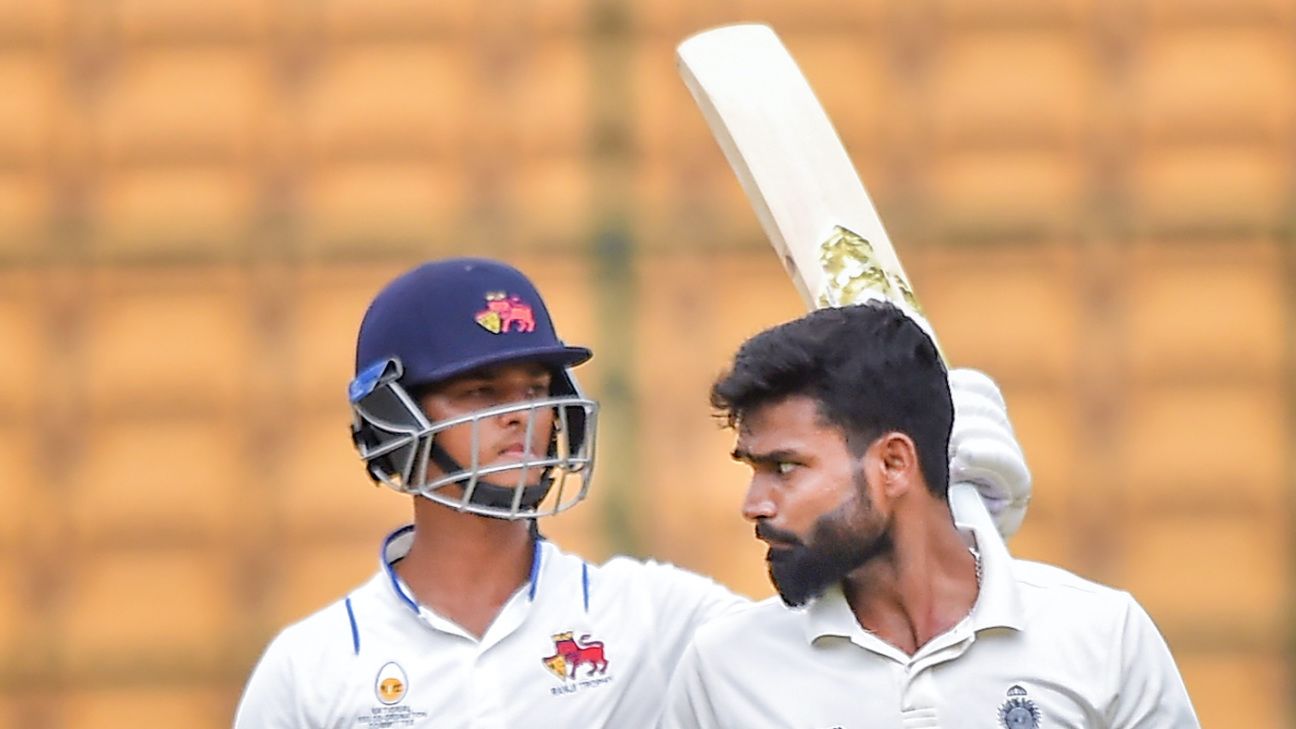 Yashasvi Jaiswal missed winning the IPL with Rajasthan Royals last month but hopes the Ranji Trophy can be Mumbai’s this month.
Coming in on the back of three straight centuries, he had a great opportunity to make a fourth, and join an elite Mumbai list occupied by two legends – Vijay Merchant and Sachin Tendulkar. But after digging in and battling it out for nearly two sessions against Madhya Pradesh, he fell 21 short of the landmark, out to a loose drive to gully to squander the massive opportunity.
The recent upturn in form has been particularly satisfying for Jaiswal because he had been dropped for the league phase prior to the IPL. The Mumbai team management had preferred Aakarshit Gomel to do the job. But scores of 8, 21 and 15 in the face of stifling competition didn’t do him any favours.

Come the knockouts, Jaiswal had a belated opportunity to make amends. A combination of rigorous batting time at the IPL and the confidence he exuded during match simulations in the build-up forced his inclusion, and the runs haven’t stopped flowing. Over the past three weeks, he has racked up scores of 35, 103, 100, 181 and 78.

On Wednesday, it was a test of Jaiswal’s patience for large parts. Early on, he attacked the spinners, particularly Kumar Kartikeya. But against pace, he shelved that flair for the hard grind, leaving deliveries alone and ensuring he was almost always playing a tight game in trying to see through the bowlers under overcast skies.

“People are telling you a lot of things. They want you to do well, but they put pressure on you. I’m happy to take that pressure, I enjoy it and when I do well [under pressure], I feel proud.”

Having bought into the plan of trying to wear MP’s four-pronged attack, Jaiswal was out playing a loose drive to gully. He took an eternity to walk off, but after play, appeared a lot more at peace with the dismissal. He wasn’t going to beat himself over it.

“Yes, I’m a little sad, but that’s cricket,” he said philosophically. “Sometimes it goes well, sometimes it doesn’t. I was trying to stay as long as possible at the wicket and play as per the team’s needs. I knew the longer I bat, the more the team will benefit.”

Jaiswal loves pressure. He is learning to embrace it, he says. In the IPL, he was left out after three games and brought back in at the far end with Royals trying to cement a top-two spot. He averaged 33.28 and struck at 137.05 in the last seven games, forming a fearsome opening combination with Jos Buttler. Coming into the knockouts, similarly, the runs have given him plenty of confidence going forward.

“A final is different,” he said. “The mindset is different. People are telling you a lot of things. They want you to do well, but they put pressure on you. I’m happy to take that pressure, I enjoy it and when I do well [under pressure], I feel proud. I go with that mindset of wanting to do it and I fully trust myself and believe in myself to do that.”

One of Jaiswal’s hallmarks is his ability to shut out the noise between balls. He isn’t the one to be bogged down by mind games. He doesn’t respond to chirp but instead focuses fully on his idiosyncrasies. Like having his helmet in the best position, ensuring his gloves are strapped tightly, the shrug of the shoulder and a series of taps before he is ready. And after he plays a ball, he is quick to turn his back to the bowler, leaving no scope for words to be exchanged.

MP tried their hands at gamesmanship very early in the day, first handing the ball to Anubhav Agarwal, as if to suggest they were opening with a fast bowler. Jaiswal knew what was coming and made his intentions very clear. He had to be a step ahead of the opponents. His first boundary was a skip down the track for six off Kartikeya.

“They were trying to play tricks, with the keeper going back [to suggest they would open with a fast bowler], but we knew a left-arm spinner is going to bowl and were ready. It’s normal. We know whoever is going to bowl, we need to watch the ball. At the start, I thought the wicket was pretty damp and it was easier to hit the spinners but not the fast bowlers. I was trying to score, because I knew I could get them but not the fast bowlers, because it was difficult. I was thinking this is the way I need to approach it.

“I knew whenever we score runs, they will bowl way outside off our outside leg to try and restrict. I wasn’t worried with my dismissal. The ball wasn’t moving then, and it wasn’t an easy shot, I just played it and didn’t cover the line properly. It’s okay.”

The surge in form has elicited prospects of possibly an India A call-up sometime soon. Jaiswal, though, isn’t thinking that far. There is a job to do here and now. “I don’t keep thinking that will happen in the future,” he said. “The focus in the process. What I do in daily life is important.

“I just keep working hard at training, on my fitness. It’s not easy playing a five-day game and then coming back for another five-day game after two days in between. You need to be fit, you need to eat and sleep well, be disciplined. I’m just focused on that.”

Shashank Kishore is a senior sub-editor at ESPNcricinfo