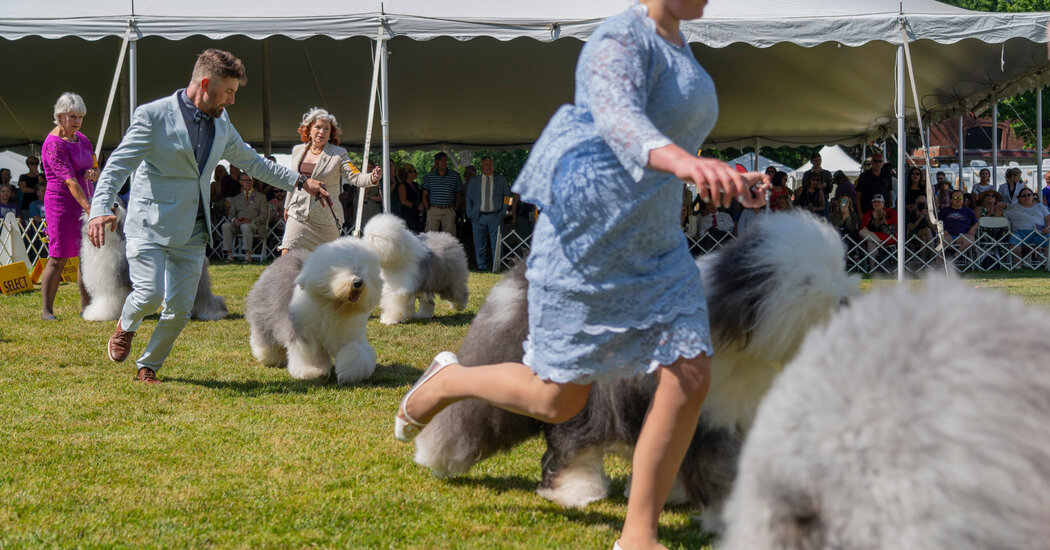 This was supposed to be the year in which the Westminster Kennel Club Dog Show made its triumphant return to Madison Square Garden. Unfortunately, the coronavirus pandemic got in the way — again.

But while the setting and the timing remain atypical, a new Best in Show winner will be crowned on Wednesday, ending the run as reigning champion of Wasabi the Pekingese, who seems to be enjoying his retirement — even if he refuses to play fetch.

Originally scheduled for late January in New York City, the annual competition was shifted to June because of a surge in coronavirus cases. And for a second straight year, it will be held at Lyndhurst, a Gothic Revival mansion in Tarrytown, N.Y., rather than the Garden.

The dogs, thus far, do not seem to mind.

How to Watch Tonight’s Action

The New York Times will be providing live coverage of Wednesday’s group finals and the awarding of Best in Show, with commentary, analysis and photos from Lyndhurst.

Television coverage in the United States will be on FS1, beginning with a preshow at 7 p.m. Eastern. In Canada, the event will be on Sportsnet One.

At 7:30, judging will begin in the finals for three undecided groups — sporting, working and terrier — with those champions competing against four group winners from Tuesday for Best in Show. Things are expected to wrap up around 11 p.m.

The event can be streamed on the Fox Now and Fox Sports apps. A Spanish-language version of the broadcast will air on Fox Deportes at 6 p.m. on Thursday.

It is hard to draw a sharper contrast from the typical winter activities of the dog show than grass, bright colors and a Yorkshire terrier’s coat glistening in natural light.

Neal Brower doesn’t just have a tie with a handsome Scottish terrier on it: It is a tie featuring photos of his Scottie, Vispa.

This is not trick photography or a mirror. Elliott and Emmett, a pair of Bichons Frises, were both being groomed by Lindsey Dicken.

The dogs are in Tarrytown for work, but try explaining that to Tucker, a redbone coonhound, who just wanted to show Cody Wright some love.

The whereabouts of the other 99 Dalmatians is currently unknown.

Stealth, a toy Manchester terrier, and Daniel, a standard poodle, are clearly not messing around.

The amount of grooming for Westminster can be intense. Handlers, owners and dogs all want to look their best.

We are down to 98 unaccounted-for Dalmatians.

You never know who might have a treat, and this chow chow was not willing to sit politely and wait to find out.

Plenty will wonder if the dogs of Westminster have any idea what is going on during the hectic multiple-day contest. Quin, a chow chow, clearly knows the score.

Freddie, an Old English sheepdog, got his wiggles out by showing some love for his handler, Mandy Maxwell.

A group of Afghan hounds basked in the outdoor setting, with Lyndhurst providing natural light to make their coats shine.

Storm did not seem as comfortable as the Afghan hounds, but greyhounds do the worrying so other dogs don’t have to.

The dog-related accessories have been in full force in Tarrytown. While an understated earring can be a nice touch, the perfect complement to dog-embroidered jeans is clearly dog-covered clogs.

Family is family as Ferdinand and Venus Fly Trap, a pair of Ibizan hounds, took in the scene with Lucia, a Pharaoh hound. The three were accompanied by their owner, Sarah Murphy.

This dog necklace works with a glittery outfit, but would it also work with dog-embroidered pants?

If there isn’t a catchy name for a group of smooth collies, there should be. Tito, Vava, Damnit and Cindy Lou deserve one.

It is hard to be more regal than a group of borzois in formation.

And it is hard to be more adorable than an American foxhound.

Looking as good as Iris, however, is not easy. It requires quite a bit of attention, which Olivia Betancourt was happy to provide.