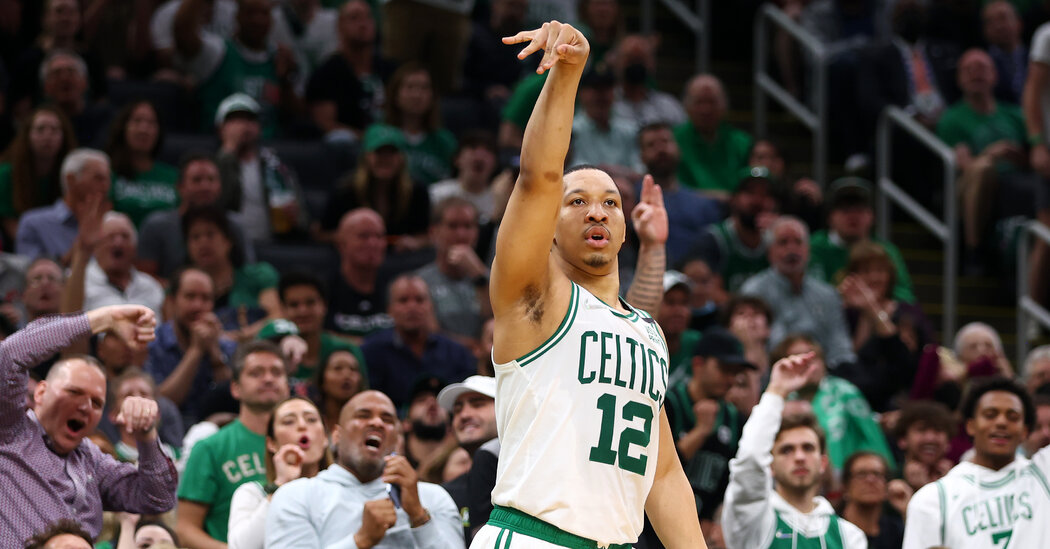 BOSTON — The Milwaukee Bucks opened the third quarter on Sunday afternoon by putting the ball in the enormous hands of Giannis Antetokounmpo — and that tends to be the most sensible decision.

Antetokounmpo can do things on a basketball court that no one else can do, and for six and a half games of his team’s Eastern Conference semifinal series with the Celtics, Antetokounmpo had done many of them: scoring, passing, rebounding, soaring. The Bucks had leaned on him to supply his usual brand of genius against an opponent with more depth, more options and lots to prove.

But even Antetokounmpo is human. After he missed a 3-pointer just seconds into the second half, he got the ball back for a finger-roll layup that he left on the front of the rim. As the ball caromed out of bounds, Antetokounmpo doubled over in disbelief: How? How had he missed? How was it possible?

In a tightly contested series that was stretched to its limit, the Celtics seized on that small opening — and others like it — to build on their lead and run away with a 109-81 victory in Game 7. Now, the Celtics, after adding to their season-long comeback story by eliminating the N.B.A.’s defending champions, will face the Miami Heat in the conference finals, starting Tuesday in Miami.

Grant Williams led the Celtics with 27 points, and Jayson Tatum added 23. The Celtics did most of their damage from the 3-point line, where they shot 22 of 55. The Bucks were 4 of 33.

Last month, Kyrie Irving of the Nets told reporters that the Celtics’ window was now. And he made that proclamation even before the Nets’ first-round series with the Celtics was over. It ended soon enough, as the Celtics completed a four-game sweep.

Irving and Kevin Durant in the first round? Antetokounmpo in the conference semifinals? The Celtics were undaunted. And make no mistake, their series with Milwaukee posed a big challenge, especially after they blew a 14-point lead to lose Game 5 at home. Facing elimination on the road in Game 6, the Celtics sailed to a win behind Tatum’s 46 points and set the stage for Game 7.

The Celtics had already been tested. Their whole season had been a test. They had a losing record in late January, before they found their chemistry. They began sharing the ball. They played tenacious defense. And Tatum and Jaylen Brown started to fulfill their twin-pronged potential as the Celtics emerged as the league’s best team over the second half of the regular season.

They made a statement by sweeping the Nets. They proved it was no fluke against the Bucks.

Antetokounmpo, a two-time winner of the N.B.A.’s Most Valuable Player Award, had 25 points, 20 rebounds and 9 assists on Sunday. The Bucks again missed the floor-spacing presence of Khris Middleton, an All-Star forward who was sidelined for the series with a sprained left knee.

Playing in front of a home crowd that turned out early to give Tatum, Brown and the rest of the team standing ovations during warm-ups — yes, warm-ups — the Celtics seemed understandably tight in the opening minutes. A Game 7 crowd can generate explosive noise, but it can also go pin-drop quiet, which was what this one did after Antetokounmpo made a 3-pointer for a 10-3 lead.

Win or lose, the Bucks were going to do everything they could to make things difficult for the Celtics. That much was clear from the earliest minutes of the first quarter, when Jrue Holiday began playing full-court defense on Tatum.

It was going to be that type of game: slow, methodical, physical. Boston settled in for the grind. Williams was laboring with his jumper when he found a seam to the basket in the second quarter. But as he elevated for a layup, the Bucks’ Brook Lopez popped up as he if had been teleported into the lane and swatted the shot away.

Yet along with sinking the occasional 3-pointer, the Celtics continued to scrap. After Daniel Theis stripped Antetokounmpo at one end, Marcus Smart followed Brown’s missed layup at the other end with a put-back dunk. Antetokounmpo had a ferocious first half — 17 points, 12 rebounds, 7 assists — but Boston still led, 48-43, which did not bode well for Milwaukee.

The Celtics created the separation they needed in the third quarter from long range, each jumper more backbreaking than the last. Derrick White’s 3-pointer gave Boston a 15-point lead entering the fourth. The rest of the game was a party that masqueraded as the final minutes of a playoff game.

For Ime Udoka, the Celtics’ first-year coach, it was another first in a season full of them: his first Game 7. Udoka, though, seemed impassive before the game, as usual.

“For me, nothing changes,” he said.

The Celtics got some good news before the game: Robert Williams III, their defense-minded center, was available to return to the lineup after he had missed the previous three games with soreness in his surgically repaired left knee. His presence meant Udoka had another body to throw at Antetokounmpo.

Williams, though, had not done much basketball-related activity in the days leading up to the game, and Udoka made clear that he was going to use him only as needed.

As the Celtics extended their lead, Williams never had to leave the bench except to cheer.