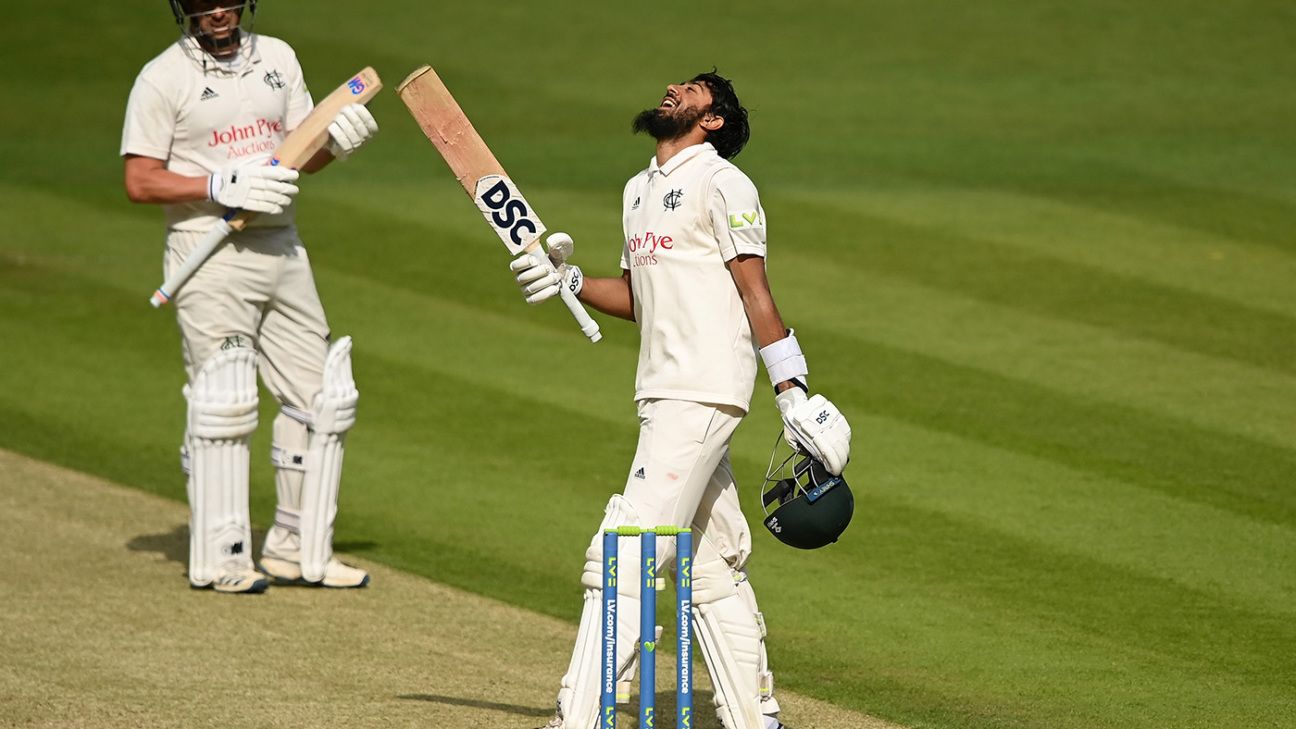 McCullum was the inspiration for England’s white-ball revolution, master of ceremonies at Morgan’s wedding and his coach when he captained KKR to the IPL final last year; they share passions for red wine, horse racing and gambling and while Morgan is not directly involved in the Test side, the influence he has had on English cricket will be clear throughout the Ben Stokes-McCullum era.

So it was fitting that on the day McCullum’s appointment was ratified and confirmed publicly, Morgan was back at Lord’s – supposedly for a gym session, though he was seen in conversation with Stuart Broad pre-match and later on the Middlesex balcony catching up with team-mates with the start of the T20 Blast two weeks away.

Morgan’s presence meant this was a chance for Nottinghamshire’s batters to make an impression. When Haseeb Hameed threw his head back and raised his bat after clipping Tim Murtagh’s first ball after tea off his pads for four to reach a first hundred of the season, he could feel confident that he had done so.

Hameed’s first seven innings of the season had brought a solitary half-century, with several starts but an average of 26.83. His first-innings dismissal against Glamorgan last month appeared to confirm that luck had deserted him: he was run out at the non-striker’s end when James Weighell deflected Ben Slater’s straight drive into the stumps via his boot, sticking out a hopeful left leg as he slid over in his follow-through. This, then, was a welcome return to form at a ground where he made the final hundred of his Lancashire career three years ago.

It was not a faultless innings: he played uncharacteristically aggressively early on – perhaps subconsciously changing his method after reading reports of McCullum’s impending appointment – and survived some awkward flirts in the off-stump channel. But his 112 set the game up for Notts against the early pace-setters in Division Two after they had been asked to bat first, reinforcing their well-founded belief that they are the best side outside of the top flight this year. He was well supported by Steven Mullaney, the club captain and one of the more reliable middle-order batters on the circuit, who targeted the short boundary towards the Grand Stand to good effect in his 91 not out.

“It was just a case of trying to keep things simple,” Hameed said of his innings. “I felt like if I continued playing the way I was there would be a big score around the corner. I just had to keep that belief and thankfully I was able to get a decent one on the board today.

“The pitch was a little on the slow side but there were a number of play-and-misses throughout the day and a lot of the dismissals were genuine nick-offs, even with an older ball at times like mine. I feel like there’s enough in there for us to take 20 wickets.”

Hameed is, at best, an outside bet to play in the first Test of McCullum era, against New Zealand at this ground in three weeks’ time, and was keen to avoid the question of a recall. “I saw there was a decent chance he’d be made coach,” he said. “I know Broady was pretty excited about that appointment but honestly, there hasn’t been too much chat about it. I’m not even looking that far: for me, it’s always been important to keep things very short-term and very simple. That hasn’t changed.”

Perhaps the day’s most intriguing innings came from Ben Duckett, who edged Ethan Bamber behind shortly after lunch for 42. He was handed an early life on 4 when Peter Handscomb put down a straightforward chance at first slip off Murtagh, but played brightly, driving confidently through extra cover and working through midwicket off his pads.

Duckett is among a number of batters who could fill England’s vacancy at No. 3 and his unshackled approach in first-class cricket – his strike rate this season, 65.42, reflects a calculation that attack is the best option on seam-friendly Trent Bridge pitches – is in sync with McCullum’s preference for positivity. If he misses out on a Test recall, Morgan may well take a look at him in June’s ODI series in the Netherlands.

Middlesex were unable to call on their star overseas signing Shaheen Shah Afridi, who has returned home to Pakistan to “rest and spend time with family and friends” before an ODI series against West Indies in a month’s time. He is due to return for the back end of the Blast’s group stages and Middlesex have plenty of fast-bowling depth but his absence is clearly a blow – as it would be to any team in the world.

With the notable exception of Toby Roland-Jones, their seamers struggled to keep the scoring rate in check though Bamber, Murtagh and Martin Andersson all threatened at times. But it has been their batting that has been the major point of improvement this season: an attack of Broad, Luke Fletcher and a well-rested James Pattinson will offer a test of their progress at some stage on Friday.