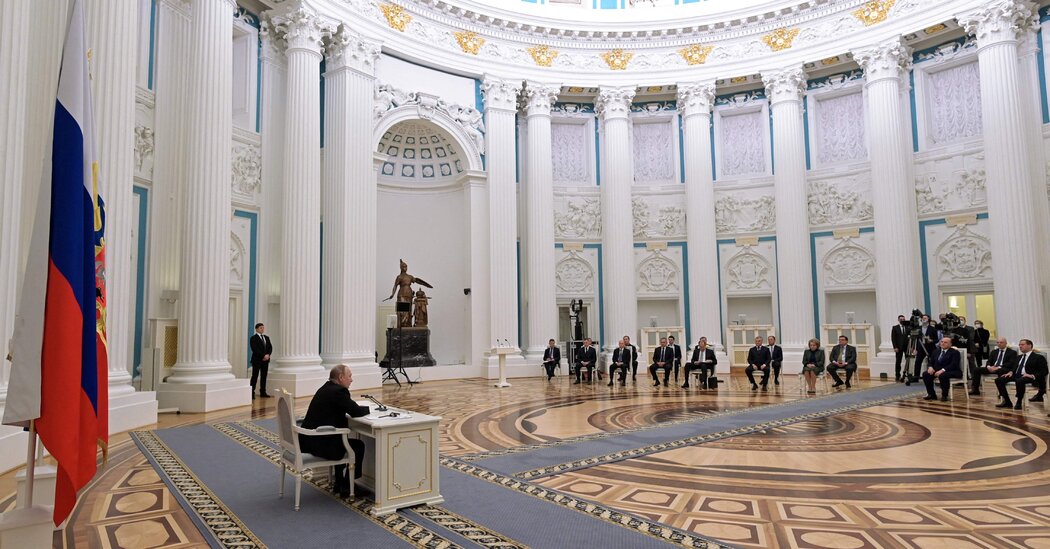 In a long and heated address on Monday, Vladimir V. Putin, Russia’s president, spun a narrative whose implications sprawl well beyond his stated purpose of recognizing the independence of two Ukrainian territories held by Moscow-backed separatists.

Mr. Putin’s speech was awash with hard-line Russian nationalism, angry paranoia toward the West, baseless claims of Ukrainian aggression, a sense of lost imperial pride on the verge of reclamation and, most of all, invocations of history, much of it distorted or fabricated.

While his comments might have sounded rambling to Western ears, Mr. Putin may in fact have been articulating what amounted to a calculated series of justifications for a further invasion of Ukraine aimed at the Russian public, whose support he will need to maintain it. What follows is a concise annotation of several key passages that convey Mr. Putin’s overt and implied case for war.

Since time immemorial, the people living in the southwest of what has historically been Russian land have called themselves Russians and Orthodox Christians.

So, I will start with the fact that modern Ukraine was entirely created by Russia or, to be more precise, by Bolshevik, Communist Russia. This process started practically right after the 1917 revolution, and Lenin and his associates did it in a way that was extremely harsh on Russia — by separating, severing what is historically Russian land.

Mr. Putin is repeating his longstanding argument that Ukraine’s borders are an artificial creation of Soviet planners who unjustly cordoned rightful Russian land within the Ukrainian Soviet Socialist Republic.

In reality, internal Soviet borders reflected centuries-old cultural and political divides, as well as what Moscow’s own census takers found to be an ethnic Ukrainian majority throughout that territory, including in what is now eastern Ukraine.

Mr. Putin’s comments, which build on his justification for annexing Crimea in 2014, imply a mandate to assert Russian sovereignty over part or all of eastern Ukraine, as well, even if for now he is only recognizing the independence of the Moscow-backed separatists who control parts of it.

His repeated references to Ukraine as artificial, and his past claims that “Ukraine is not even a state,” as he said in 2008, suggest he may also be leaving himself the option of declaring all of Ukraine to be a historical invention, serving to justify a wider invasion.

Mr. Putin is pointedly suggesting that Ukrainians should have thanked Vladimir Lenin, the founding Soviet leader whom Mr. Putin blames for Ukraine’s borders, rather than overturning Soviet-era statues during 2014 protests against Kyiv’s pro-Moscow government.

His reference to “real de-communization” implies that Mr. Putin is preparing to erase what he considers Lenin’s actual legacy by forcibly redrawing Ukraine’s borders to his liking.

The virus of nationalist ambitions is still with us, and the mine laid at the initial stage to destroy state immunity to the disease of nationalism was ticking. As I have already said, the mine was the right of secession from the Soviet Union.

Mr. Putin simultaneously presents himself as championing Russian nationalism, through blood-and-soil territorial claims, and as fighting the “disease of nationalism,” in this case Ukraine’s long struggle for national autonomy.

This contradiction is rooted in his obsession with the breakup of the Soviet Union, to which he dedicates a long section of his speech.

It is now that radicals and nationalists, including and primarily those in Ukraine, are taking credit for having gained independence. As we can see, this is absolutely wrong. The disintegration of our united country was brought about by the historic, strategic mistakes on the part of the Bolshevik leaders and the C.P.S.U. leadership, mistakes committed at different times in state-building and in economic and ethnic policies. The collapse of the historical Russia known as the U.S.S.R. is on their conscience.

Mr. Putin argues that Ukraine and other former Soviet republics were manipulated into declaring independence from Moscow by self-interested opportunists.

In reality, an overwhelming majority of Ukrainians — including in the eastern Ukrainian regions that Mr. Putin suggests were ripped from Russia against their residents’ will — voted to establish an independent state.

These comments portray the Ukrainian state as an illegitimate creation: an act of theft from Russia and Ukrainians who should still be under Moscow’s rule.

And, in an escalation drawing concern across Europe, Mr. Putin suggests that this applies to all former Soviet republics. Three of those countries are now NATO members, meaning that the alliance has committed to their defense: Estonia, Latvia and Lithuania.

An Attack on Legitimacy

The Ukrainian authorities — I would like to emphasize this — began by building their statehood on the negation of everything that united us, trying to distort the mentality and historical memory of millions of people, of entire generations living in Ukraine. It is not surprising that Ukrainian society was faced with the rise of far-right nationalism, which rapidly developed into aggressive Russophobia and neo-Nazism.

This is the beginning of Mr. Putin’s explicit case for war to seize parts of eastern Ukraine and his implied case for possible war against all of Ukraine.

The modern Ukrainian state itself, he argues, is a kind of attack on Russia because it divides Ukrainian and Russian peoples who should be united and because it cultivates anti-Russian extremism to justify this division.

In reality, Ukraine’s ethnic and linguistic groups have coexisted far more peacefully than Mr. Putin claims. While the country’s Russian-speaking populations have sometimes favored political ties with Moscow over those with the West, the country’s politics have reflected this, and those groups have grown sharply distrustful of Russia since 2014.

Essentially, the so-called pro-Western civilizational choice made by the oligarchic Ukrainian authorities was not and is not aimed at creating better conditions in the interests of people’s well-being but at keeping the billions of dollars that the oligarchs have stolen from the Ukrainians and are holding in their accounts in Western banks, while reverently accommodating the geopolitical rivals of Russia.

Here Mr. Putin extends his historical revisionism into an indictment of modern Ukraine. Its government, he argues, is not a real government but a clan of thieves — and therefore due none of the rights of a sovereign state — as well as an intrinsic threat to Russian security.

By couching his case in the supposed illegitimacy of the Ukrainian state itself, Mr. Putin is suggesting that no policy change or diplomatic concession could alleviate this threat. It is, in a sense, a declaration that there is no point in negotiation, that Moscow has no choice but to coerce Kyiv’s leaders by force, or else remove them outright.

The policy to root out the Russian language and culture and promote assimilation carries on. The Verkhovna Rada has generated a steady flow of discriminatory bills, and the law on the so-called Indigenous people has already come into force. People who identify as Russians and want to preserve their identity, language and culture are getting the signal that they are not wanted in Ukraine.

Since 2004, Ukraine has moved, often slowly, to elevate the status of the Ukrainian language.

Russian officials and state media have sought to portray this as part of a galling campaign to marginalize or even outright exterminate Ukraine’s Russian-speaking populations.

They prefer not to acknowledge this, there is no genocide perpetrated against 14 million people.

Such claims, which are largely fictitious, serve to justify Russian military interventions as protecting populations that Moscow had both a right and a duty to defend. They also implicitly assert a Russian right to dominate what Mr. Putin has called the “Russian world” — territory containing large numbers of Russian speakers or ethnic Russians, which roughly maps onto the old Soviet borders.

But Russian attitudes toward Ukraine have since cooled to 45 percent favorable and 43 percent negative, a recent poll found. Other polls suggest most do not want overt war, which may be why Mr. Putin is seeking to renew public outrage.

The Kyiv authorities cannot challenge the clearly stated choice of the people, which is why they have opted for aggressive action, for activating extremist cells, including radical Islamist organizations, for sending subversives to stage terrorist attacks at critical infrastructure facilities, and for kidnapping Russian citizens. We have factual proof that such aggressive actions are being taken with support from Western security services.

In fact, this is nothing other than preparation for hostilities against our country, Russia.

These outlandish accusations of Ukrainian and Western plots to attack Russia are most likely intended for the Russian public, portraying further invasion of Ukraine as necessary to defend Russian families — rather than a pursuit of lofty regional ambitions that might be a harder sell.

Understand How the Ukraine Crisis Developed

Failed diplomatic efforts. The United States, NATO and Russia have been engaged in a whirlwind of diplomacy to prevent an escalation of the conflict. In December, Russia put forth a set of demands, including a guarantee that Ukraine would never join NATO. The West dismissed those demands and threatened economic consequences.

But these claims might not be entirely strategic. After many years in office, Mr. Putin has tightened his inner circle to a small cadre of yes-men and security service hard-liners, who are thought to tell him only what he wants to hear.

It is possible that Mr. Putin sincerely believes some portion of the foreign threats he claims, perhaps especially those regarding NATO.

The Ukrainian army is waiting to get into NATO. … The West has explored the territory of Ukraine as a future theater, future battlefield, that is aimed against Russia.

Mr. Putin has long striven to prevent more of Russia’s neighbors from joining NATO. Throughout negotiations during the current crisis, he has insisted that NATO revoke Washington’s 2008 declaration that it would consider membership for Ukraine or Georgia.

It is difficult to say for certain whether his claims of a NATO plot to attack Russia represent his sincere belief or an exaggeration for political effect.

Once again, they threatened us with sanctions. They will still impose those, the stronger and more powerful our country becomes. They will always find an excuse to introduce more sanctions regardless of the situation in Ukraine. The only goal they have is to contain the development of Russia.

Mr. Putin is telling Russians that there is no point in constraining Russian foreign policy to avoid sanctions that will come no matter what — and that, should Russians suffer under further economic isolation, Mr. Putin and his policies will be blameless.

This may be one of the few lines in the speech aimed at Western capitals as well as at his audience at home. European leaders know that severe economic sanctions will harm their economies as well as Russia’s. Mr. Putin may be hoping to persuade them that such a sacrifice will be futile.

A Purposeful Fog of War

Now, almost every day, they are shelling settlements. They have amassed large troops. They are using vehicles and other heavy machinery. They are torturing people, children, women, elderly people. It does not stop. We have seen no end to it.

Mr. Putin’s speech culminates by describing an entirely false Ukrainian military assault on the country’s separatist-held east. In reality, in advance of his speech, Russia-backed forces shelled territory along the line of control between Ukrainian and separatist forces.

This is likely aimed at muddying the Russian public’s understanding. If both sides accuse one another of unwarranted aggression, then who can say which is true?

But his depiction may be intended to justify even greater action than the order he issued after his speech for a Russian “peacekeeping operation” in separatist-held territories.

Western governments have repeatedly claimed that their intelligence shows that Mr. Putin is planning to stage a supposed attack on Russia-backed forces to justify a fuller invasion, perhaps even a siege of Kyiv. Many of Russia’s forces are massed on Ukraine’s northern and southern borders, far from the separatist-held east.

The picture that Mr. Putin paints at the end of his speech, of a vast Ukrainian campaign of terror abetted by hostile Western governments bent on attacking Russia, seems to leave that option open.