No decision has been made by the experienced defender on whether 2021-22 will be his final season, but that may end up being the case

Gerard Pique has hinted that the 2021-22 campaign could be his last, with the World Cup-winning defender vowing to retire as a Barcelona player.

Spells at Camp Nou are set to bookend a remarkable career for the 34-year-old centre-half, with time in the famed La Masia academy ranks followed by a four-year stint at Manchester United.

Pique has been back at Camp Nou since 2008, taking in 568 appearances for Barcelona, and as talk builds of him becoming a possible club president of the future, thoughts are starting to turn towards life after football.

What has been said?

Discussing his future plans with La Sotana, Pique said: “I will retire at Barca.

“This could be the last season, yes. I go year after year, so I cannot guarantee that I will be there next season. The day I feel that I can’t help Barca anymore, I will retire.”

During his time in Catalunya, a man with 102 caps for Spain to his name has collected eight La Liga titles and three Champions League crowns to sit alongside the European Championship and World Cup successes he has savoured with his country.

Are Barcelona in a bad way? 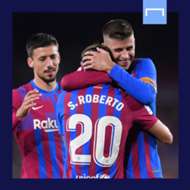 While Pique remains committed to the Barca playing cause for now, the 2021-22 campaign is shaping up to be a testing one for those at Camp Nou.

Lionel Messi and Antoine Griezmann have made high-profile departures, with books needing to be balanced in Catalunya, and the Liga heavyweights are paying the price for mismanagement off the field.

Pique admits as much, with serious questions asked of how former president Josep Maria Bartomeu allowed such a mess to materialise.

Asked if Bartomeu is the worst candidate to ever fill a prominent post at Barca, Pique said: “I don’t know if he was the worst, but for me, during my time, he’s on the list for sure.

“We all make mistakes, but in his time Barca weren’t where they should be.”

Is the future looking brighter?

While Barca are having to rebuild at present, there is still enough quality on their books to compete for major honours.

They also have an experienced coach at the helm in the form of Ronald Koeman, who knows all about the demands of the club from his playing days, and Pique believes there will be better days to come.

He added: “I’m excited. The next five or 10 years will be very good for Barca.”