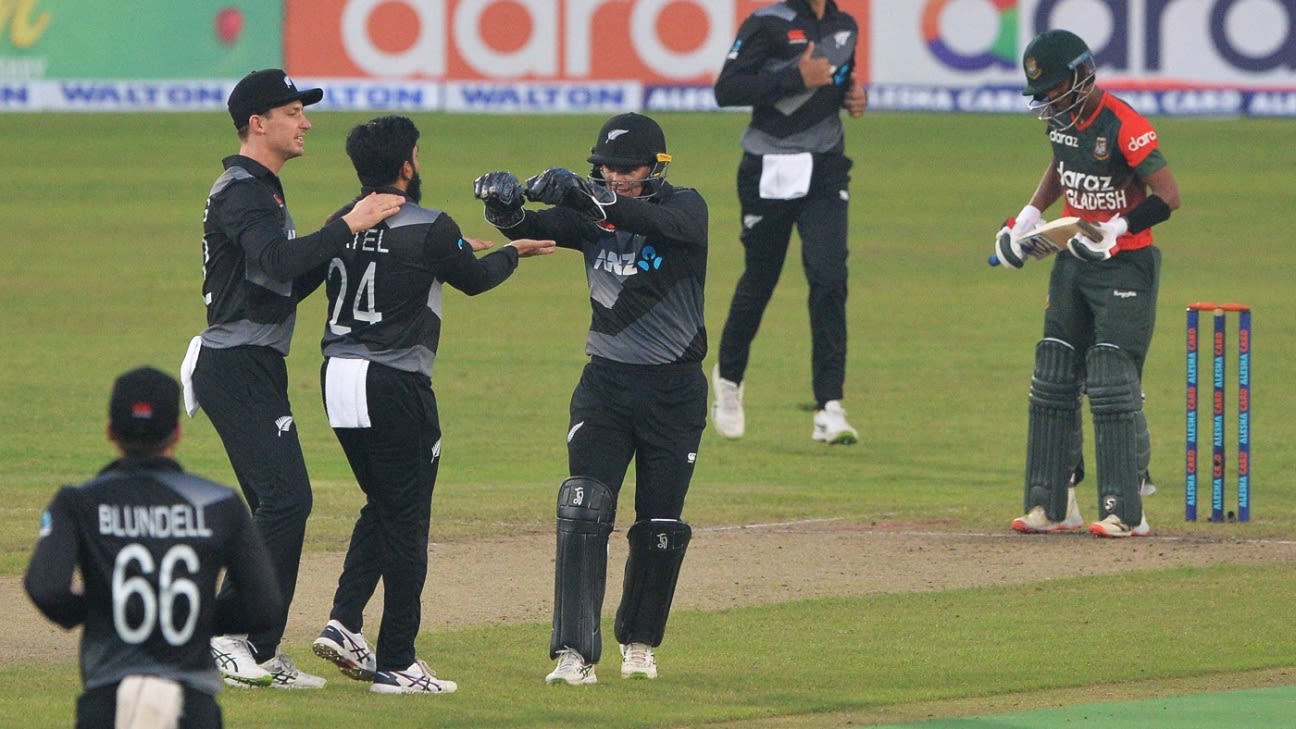 Bangladesh had been skittled for just 76 in the third T20I

Bangladesh’s batting coach Ashwell Prince found the batters to be “too aggressive” when chasing New Zealand’s 129 target in the third T20I in Dhaka. He said that they could have chased down the total had they been a bit more circumspect, rather than going all guns blazing to get bowled out for 76 in 19.4 overs.

“I think we could have been a little bit more composed in our run-chase,” Prince said. “We had a beautiful start. The openers [Mohammad] Naim and Liton [Das] hit about five boundaries, getting us to 20-odd in two overs. We were ahead of the run rate at that stage. But we lost too many wickets too quickly in the next three-four overs.

“Possibly we were being too aggressive early on. I don’t think the pitch changed much. I think 129 was a competitive target, which we would have reached if we were a little bit calmer in the run-chase.”

Prince said that rotating the strike could have got them to a stronger position in the game. Bangladesh struck five fours by 2.3 overs, but then hit just one more four in the rest of the match. Their attempted aggressive shots got them either bowled or ended up in the hands of the New Zealand fielders.

“Obviously it is not a fast-scoring pitch,” Prince said. “There won’t be a lot of boundaries. I think when you are chasing 130-140, [you need to] rotate the strike, get a single, get off strike, get a rhythm in the batting line-up [and] getting the team’s run rate up to six an over. It would have made sure the asking run rate didn’t get too far.”

Opener Liton also admitted on Monday that he should have played more carefully. He struck three fours quickly, but then got out trying to hit another one off offspinner Cole McConchie in the third over.

“Batting has been challenging in these conditions,” Liton said. “The last three matches have been low scoring. Both sets of batters are suffering. The general mindset in T20s is to make big scores, maintain a strike rate.

“Since these are not happening, we are having to change our game accordingly. It is tough to make the change, to manage yourself in T20s in these type of wickets. Batsmen are usually in aggressive mode.”

Prince said that Bangladesh have all that’s needed in a batting line-up, but they need to assess the conditions properly “There were good run-chases against Zimbabwe and Australia. Particularly, Afif [Hossain] and Sohan against Australia. You need to have a combination of batsmen in the team.

“You have guys who can rotate the strike, can hit boundaries, and then you have a group of guys at the end of the innings, who can chase nine-ten runs an over when necessary and pitches are conducive. I think we have a good combination, but it is important to read the pitches on the day, and adapting your game according to the surface.”