Regardless, the Super Eagles’ defender is upbeat about the three-time African champions’ chances of reaching the global football showpiece

The Super Eagles lock horns with the Blue Sharks in continuation of the qualifying campaign on Tuesday at the Estadio Municipal Aderito Sena in Mindelo.

Both teams settled for a 0-0 draw in their only meeting played in 2013 en route Nigeria’s Africa Cup of Nations triumph in South Africa.

Weighing in his thoughts ahead of Tuesday evening’s showdown, the 2013 Fifa Confederation Cup star warns that Gernot Rohr’s side should be wary of Bubista’s team – which he described as a ‘good side’.

“We played Cape Verde in 2013 before the Africa Cup of Nations and judging by that experience, I can tell you that they are not a bad side,” Kwambe told Goal.

“Although they are not a popular team in Africa, they are a very good side. So, I feel they will be the Super Eagles’ major threat in the race to Qatar 2022.

“Even at my thinking, we have to watch out for Liberia and the Central African Republic who can prove difficult and even cause us some troubles.” 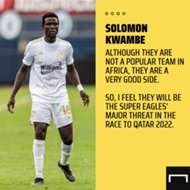 One factor that will boost Nigeria’s confidence in Mindelo is the fact that Cape Verde have lost two of their last three World Cup qualification matches played at home.

Given the quality in Rohr’s squad, the FC Tulsa star sees the country making their seventh World Cup appearance in the middle east country.

“The squad now have a lot of talented players and that’s a good sign for the country because these players will serve us with the required energy to win matches,” he continued.

“With luck on our side, I see us picking one of the tickets to represent Africa in Qatar. We began our game on a winning note against Liberia in Lagos and that’s an indication that we are on course to qualify.

“We must avoid complacency and also not look down on other teams in our group. If this is done, then there will be no trouble.

“It is not just about the players and technical crew, every Nigerian have a role to play in this qualification campaign.”